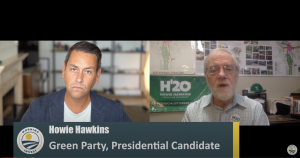 Now before you click off, thinking that the Green Party is a divisor for the Democratic Party, hear what he has to say. Recently, the Democratic Party made moves to remove the Green Party from the ballot in several states, disenfranchising voters who want more than two choices for leadership. Clayton asked Hawkins all about this as well as the serious proposals he has for our country.

Hawkins says that the two-party system does a disservice to us all. No other country in the world has the political parties running the elections, working to maintain control. The Republican Party has not been the main offender against the Green Party since those voters wouldn’t necessarily go towards the GOP otherwise. The Democratic Party, however, does look to the Green Party as a vote siphon.

“The Democrats think that “oh, now all these people will vote for them.” That’s where they’re mistaken,” he said.

He pointed out that many Jill Stein voters in the 2016 elections reported that they would have stayed home had she not been on the ballot.

“Party suppression is another form of voter suppression,” Hawkins said.

So what does Hawkins and his party stand for?

In the short term, he stands for additional stimulus. He absolutely believes this is necessary to help us survive the COVID pandemic.

In the long term, he proposes a form of universal basic income, a share of federal money that families can rely upon every month to meet basic needs. He believes that giving everyone a base living wage would allow workers to pursue their dreams, contribute to a growing economy, lessen debt for welfare programs, and reduce crime.

And of course, the Green Party is a proponent of the Green New Deal, which supports innovation in climate change and ecological business. While certain politicians want to play down a 3-degree increase in temperatures in California, Hawkins does not. He thinks that this is significant and terrifying.

“I grew up in California and I never saw lightning storms as a child,” he says. The increased incidents in lighting, he says, can be attributed to increased heat and pressure in the atmosphere and there is no time to waste to eradicate this.

The Green New Deal also offers support to American farmers by allowing those that work farms now, immigrants or citizens, to own the land that they work, empowering them to help feed the country in a safer, more ecological way. He also believes that this will have the added effect of increasing the nutrition of school lunches, which everyone knows, can hardly be called nutritious at all.